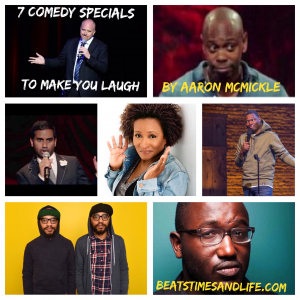 Because I work at night, usually only three days a week, I have a lot of time at home. Most of it is spent finding new music, cutting records, playing bass and writing these blog posts. Ok sometimes I watch an entire season of a show in two days! (sorry not sorry)  I really try not to watch to much TV though.  So my new found love is stand up comedy. Why? because I can put it on, and still clean up the kitchen,  prep dinner, straighten up and do other things while it’s on. I just listen and laugh.

Since everyone loves to laugh here are 5 comedy specials that I found hilarious.

2. Dave Chappelle- Deep in the heart of Texas- (Netflix) This is the second special Dave Chappelle released on Netflix this year. After his very long hiatus, one of the kings of comedy is back. A lot of people were offended by these specials, but it’s stand up comedy, I thought it was par for the course. We have to remember he tells “Jokes and Jokes and Jokes and Jokes!” All comedians are just kidding, the entire performance is based on joking.

What I love about this special and his style in general is how he attacks race. He uses stereotypes and current events as fuel to touch on the different ways people live and are treated by society.  The opening bit about the 4 white teens that assault him touches on racial hierarchy in an extremely skillful way. He also gets into Ebola and AIDS by saying “Isn’t it funny how all these diseases hate and kill everyone that old white people hate.”  He heads right into police killing Black people, Isis decapitating people, Paula Deans racial slurs, and Bill Cosby rapes, making  those profane topics so pretty and hilarious.  Watch it and laugh, but don’t take yourself too seriously, It’s just jokes.

3. Aziz Ansari- Buried Alive- (Netflix ) He kills this set. So much relatable material delivered with high energy and a lot of great analysis. Millennials, dating, as well as the joys of being and not being a parent are all addressed in extremely remarkable ways.  I have seen the act twice and even though I knew what jokes were coming, I still was laughing. Why? Because it’s quality material. He interacts with the audience on topics such as dick pics, meatheads in the club and on line dating. Many times reenacting the scenario while playing two or three different roles. Sorta like Biggie on “Gimmie the Loot“.

The set is on point, highly recommended.

4. Michael Che- Che Matters- (Netflix) Che commands the stage and the audience with ease as he takes on racism, gentrification, catcalling, Donald Trump, terrorism and transgender issues. Che has written these jokes knowing full well his audience and the reactions they will have, and it works to perfection. In one bit on gentrification  he asks. “White women, do you know how powerful you are, you are so powerful that the value of land can increase just because of your presence” In his stereotypical white girl voice he says  “Brooklyn used to be kind of sketch, but now its pretty chill” a dig a the drastic changes taking place in Brooklyn as we speak.

My favorite section is about  Black lives matter. He starts by saying “Black lives matter, thats a controversial statement, just matters. JUST MATTERS! Not that they are better than you, just matters” It’s a great statement, because it calls out our society in a very raw way. Just saying those three words can bring on a heated argument. Mostly because many people don’t believe that Black live matter. He’s hilarious, watch and laugh.

We all know who he is now because of his “Bill Cosby is a rapist” set that brought him to fame and Dr. Huxtable’s past into the public eye. As a Ilana Glazer’s ex boyfriend on “Broad City” he plays a laid back dentist, and his stand up comedy is a reflection of that juxtaposition. A Laid back delivery, but a truly professional set. Within this special he gracefully moves from topic to topic with quick hitting punchlines that are written to be the segue to the next joke. This makes the whole act feel totally seamless. I was alone in my apartment laughing out loud as he ripped into the “Maniacs” at Embassy Suites in Downey, California who think he faked his identity to try and check into a 2 star hotel. How Lasik eye surgery may kill or blind you, Unwillingly taking pictures with cops, and don’t judge him for his 70 dollar cleaning service, he tells the audience. “Some of you spend that much on vaporizer accessories easily, so don’t judge me”

He builds jokes with great skill making you wonder, where he is going with this? As it unfolds and tension grows he hits you with a twist. A twist that makes you bust out laughing. The best part about it is you don’t just laugh then. I found myself riding my bike listening to Parliment and thinking back to these jokes…. and laughing again. I think you will too.

Ok its really 7 specials to watch

Wanda Sykes- What happened Ms. Sykes.(Full show is on Youtube)   The perspective of the Black female is greatly underrepresented in comedy. Wanda Sykes is on top of her games in this special, using the struggles of People of color and women to make us laugh.  She makes great use of the racial dynamics of her own  family. She is Black female comedian married to a white French woman and has two “really white” kids. “Sometimes I look around my kitchen table and I get scared. I want to know ……. how did all these white people get in my house”

Wanda gives a woman’s perspective on the latest election, the economy (Nothing good trickles down), women’s rights, equal pay for equal work and gun rights.  She is an excellent writer and this set plus POOTIE TANG are excellent examples. Her take on the evolution of Talapia is classic. “I don’t f*** with Talpia, I betcha four years ago talapia had feet. Talapia was walking around, stepped in some gmo’s. His feet shrunk up and he said, I better roll my ass in the ocean”

She is comedy legend and a master of the art form. Be sure to check her out.

Lucas Bros- On Drugs- (Netflix) These twin brothers tell dead pan jokes mostly about the war on drugs and how it has affected them personally.  They hate Richard Nixon and they tell you that many times. They drop some great OJ jokes, figure out why Charles Barkley was in Space Jam, and let us know that 77 percent of black happiness comes from white suffering via a pie chart.

The end of the show is kind of like a Ghost of Christmas past cartoon.  Richard Nixon takes them back into time and shows what life would I have been like with out the war on drugs. What they found was actually horrifying. With out the war on drugs, money was put into education, healthcare and infrastructure. Poor black and brown people had opportunities and incarceration rates didn’t go through the roof.  However with no war on drugs, no crack epidemic, no crack epidemic, no urban decay, no urban decay, no hip hop. No hip hop equals no Biggie! They are presented with Christopher Wallace C.P.A. which I’m sorry to say made me cringe. Biggie brought so much joy to so many. What if Biggie Smalls was the illest….accountant?  It is a great show with lots to think about. Watch it and laugh.

I really hope you enjoy these specials as much as I did. There is so much negativity surrounding us right now. It’s nice to sit back and just laugh for an hour.