These  temps have been crazy. I’m not going to discuss the global warming aspect of this record setting week. I just want to revel in it, enjoy it. Realizing how nice it is not to have to get two kids into boots, hats, scarves, coats, and GLOVES THAT NEVER STAY ON! You get it.

Lola and I have been bike riding consistently since the summer. Our summer bike route usually included a Prospect park loop, then a stop at the Lefrak Center on the second time around.

This time our ride included a style of music I have really been into lately, and that is Cumbia.

Cumbia is a traditional dance music from Colombia. It also has African and Spanish roots. We were listening to a compilation album entitled  Afrosound of Colombia. It is full of dope breaks, tough bass lines, swinging horns, and rhythms to make you wanna dance.

In Cumbia as in all music of the African Diaspora. The rhythm section is the foundation. Claves, Congas, shakers, sticks, bells, bass drums and bass guitars. Toms, cymbals, and rhythm sticks weave in and out of one another. On top of that lay some vocal call and response. All of these meld together with what Jelly Roll Morton called “The Spanish Tinge”

“Then we had Spanish people there. I heard a lot of Spanish tunes. I tried to play them in correct tempo, but I personally didn’t believe they were perfected in the tempos. Now take the habanera “La Paloma“, which I transformed in New Orleans style. You leave the left hand just the same. The difference comes in the right hand — in the syncopation, which gives it an entirely different color that really changes the color from red to blue

Now in one of my earliest tunes, “New Orleans Blues”, you can notice the Spanish tinge. In fact, if you can’t manage to put tinges of Spanish in your tunes, you will never be able to get the right seasoning, I call it, for jazz.”- Jelly Roll Morton

What Jelly Roll is saying is that there are certain inflections, rhythms and patterns that are specific to music of Spanish decent.  And this music makes you want to dance because it has a specific feel and color.

A good example of how using the “Spanish Tinge” can add musical color to a tune not specifically Spanish  is the following.

The Rolling Stones- Sympathy for the Devil-  This song based on a TUMBAO Afro- cuban rhythm. A tumbao is a basic conga pattern prevalent in Cuban dance music. It is extremely clear to hear the  Spanish influence in the opening percussion.

Cumbia falls right in line with Jelly Roll Morton’s theory.  The musical characteristics of Cumbia are similar to lots of styles. It is way those characteristics are performed that make the difference. The syncopation used, where the rests take place, and the intonation is what separates Cumbia, and almost any other style of music.

Take a Listen to some the tracks from our bike ride. 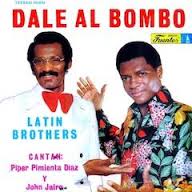 Cumbia de Luna- I hear a lot of similarity to Ska music as I listen closely. The use of the upbeat (The 2 and the 4) . In ska and reggae it is called a skank and it is a guitar accenting the second and fourth beats. On this song, it is a hi hat

In the summer Lefrak is a roller skating rink is a really cool fountain/splash pad. However in the winter it is an ice skating rink.

When we pulled up to Lefrak the look of confusion on Lola’s face was intense. 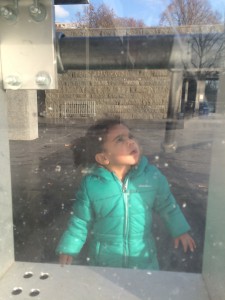 “I know this place, but now people are sliding around on ice?”

The transformation of the center from summer fun to winter activities is pretty amazing, and I am thankful to have such a resource.

I was really happy to be reliving a summer day in December. No water sprayers, no beach balls, but the sun was shining bright on the ice, and summer vibe was there.  It was 55, fleece jackets on but unzipped.

Cumbia and bike rides with your kids. I highly recommend it.