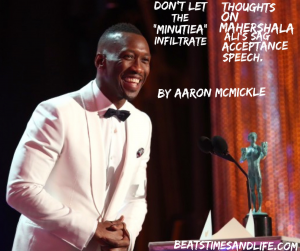 “I think that what I have learned from working on Moonlight is we see what happens when you persecute people. They fold into themselves, and what  I was so grateful about in having the opportunity to play Juan was playing a gentleman. I saw a young man folding into himself as a result of the persecution of his community and taking that opportunity to uplift him and tell him that he mattered, that he was okay, and accept him. And I hope that we do a better job of that”

I was moved by this speech last night. Mahershala Ali while accepting is SAG award for best supporting actor spoke to our humanity and emotions while holding back tears of his own. Clearly a shot at #45, but classy one. Mahershala asked us to not “get caught up in the MINUTIAE that make us different” Race, class, religion, sexual orientation, all minutiae. I’m loving that word right now. Minutiae. We are letting our tiny differences create giant divisions. Divisions that give hate and fear the ability to  huff and puff, and eventually you know what happens. Religion almost took him away from his Mother. But love won out,  not the name of their respective God.

With the March for Equal rights last Saturday, then all the immigration protests that went down this past weekend. It seems that a lot of people believe in the ideals America claims to hold dear. You know, all are created equal, give me your tired, your poor, your huddled masses and all that.

Big ups to Mahershala Ali on a your SAG award, and for helping us sift through the MINUTIAE…… one more time

Also go see MOONLIGHT! Tells a story we do not usually talk about. A population of people folded in on themselves.