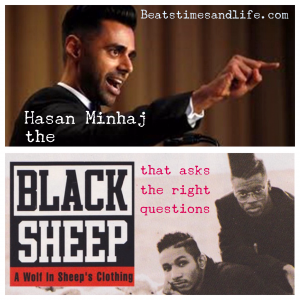 The Choice is Yours (Revisited) by Black Sheep

So, Hasan Minhaj at the White House Correspondents dinner! What! Genius. He delivered every punch line with these wide eyes and a bright surprised face. Was the look because he just can’t fathom that “King Joffrey” became president?  Or maybe he was just baffled by the current state of affairs in our country, regardless his stage demeanor and delivery made this an enduring performance. He skillfully castigates all the major news networks, gracefully calls Steve Bannon a nazi, blasts MSNBC for its hypocrisy on the prison industrial complex, takes down CNN, lays into Jeff Sessions racism as well as  Sean Spicer’s ineptitude. All the while little jokes within jokes that derided various celebrities, U.S. foreign Policy and the media itself.

Minhaj turns the tables on his colleauges when he tells the crowd.  “Right now you have to be twice as good”  no mistakes, The President does not trust you. So when one of you messes up….. He blames your whole group……. . “Now you know how it feels to be a minority”

This brilliant comparison segued into a portion about the importance of the 1st amendment, the reason they all have a job. Not to mention it is one of this countries most essential principles. He hits on the fact that “Only in America can a 1st generation Indian, Muslim kid get on this stage and make fun of the president”  An astute observation that then forces us to consider why we elected a president who does not support the 1st amendment. The man who tweets unfiltered brain refuse whenever he feels like, wouldn’t show up to pay respects to the amendment that allows him to spew hot garbage.

The fact is we do get to say and believe anything we want.  This is a very new privilege for humans in the scheme of history, and how we use our words is a big responsibility. The “Choice is Yours. “You can get with this”….. Hasan Minhaj using his talent, knowledge and spirit to make a hilarious statement on the truth about our sanctimonious country. Or “You can get with that….. A president and society that see differing view points as threatening. Threats create fear, and fear keeps us ignorant. What do you do when knowledge, preparation, acceptance and attention to detail are all frowned upon? You speak up for whats right. Use your words for good, language is a dynamic tool. Let’s use it to bring light to the truth, positivity to the world and of course, a bunch of good laughs.

Here is the full set.