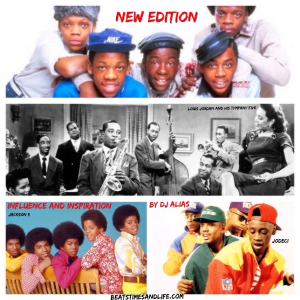 Art influences art. One talented performer admires another, analyzes what they have done, then they add their own element to it. It’s been that way since the beginning of time. Especially for Black Music in America. From Work songs, to Spirituals to Blues, Jazz, Rock, Funk, Hip Hop. Each one of these styles was built from the foundation of it’s predecessor.  The BEAT GOES ON because it is in the soul of the African to play and perform music and to dance.  I know I know it’s a stereotype, but it’s true. It was and still is a part of everyday life. I know I got to have my music right for every occasion. Shower, workout, dinner, long drive, chilling the friends, life has a soundtrack

1. It’s really good! BET  kilt the production of this series, the cast is extremely talented, and the dance steps were  TIIIIIIGHHT! I mean they were always in time and together, made the visual nostalgia that much more intense. On point in every way.

2.  New Edition grew from the soil of  Doo-Wop groups  like the Penguins, The Coasters and the Drifters. Motown groups like the Four Tops and Temptations, on to the Jackson 5. You can clearly see and hear the connections between the generations. I have seen The Jackson’s on VH-I 100 times, The Temptations 200 times, The Five Heartbeat. honestly upwards of 1000 times  From the outfits, to the dance steps, to the story arch itself. The New Edition Story is a great example of how cultural DNA passes down within Black Music.

A major focus of this website and my work in general is connecting the dots within Black Music.  Bruno Mars was quoted in Latina magazine saying

“When you say “Black Music,” understand that you are talking about Rock, Jazz, R&B, Reggae, Funk, Doo-Wop, Hip-Hop, and Motown. Black people created it all. Being Puerto Rican, even Salsa music stems back to the Motherland [Africa]. So, in my world, Black Music means everything. It’s what gives America its swag. I’m a child raised in the ‘90s. Pop music was heavily rooted in R&B from Whitney, Diddy, Dr. Dre, Boyz II Men, Aaliyah, TLC, Babyface, New Edition, Michael, and so much more. As kids this is what was playing on MTV and the radio. This is what we were dancing to at school functions and BBQs. I wouldn’t be here if it wasn’t for these artists who inspired me. They have brought me so much joy and created the soundtrack to my life filled with memories that I’ll never forget. Most importantly, they were the superstars that set the bar for me and showed me what it takes to sing a song that can get the whole world dancing, or give a performance that people will talk about forever. Watching them made me feel like I had to be as great as they were in order to even stand a chance in this music business. You gotta sing as if Jodeci is performing after you and dance as if Bobby Brown is coming up next.”

I think he just said it all. The continuity of African culture stands strong through generations.  He even put New Edition on his list of influences.

Let’s analyze this DNA strand a bit further. Can you name any Black Male R&B groups that tour and record, dance and sing like New Edition?……………………..

Nope, because there aren’t any. There is not one Black Male R&B group currently signed to a major label. Throughout the history of Black Music in America this was one of the most popular group formats. That has changed 100%. Ego’s along with a music industry that is selling fewer albums each year has killed the R&B group as we know it. I really hope there is a group of kids out there that saw the New Edition Story,  then immediately got up and started working on their steps. Please, keep the culture alive.

Below is a list of Black Male R&B groups who have influenced each other throughout the generations.

The Platters,  The Drifters, The Moonglows The Coasters, The Penguins,