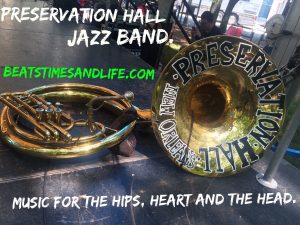 I came off the two  train with  lawn chairs strapped to my back. Sun hat, lunch, water, all packed, ready to be taken on Fantastic Voyage with The Preservation Hall Jazz Band. I arrived to a truly mellowed out Metrotech vibe. The shady court yard was subdued, but the sousaphone sound- checking to “Take me to the Mardi Gras by Professor Longhair set the tone of what was to be an epic set.

This legendary group is one of the oldest bands in New Orleans history and they paid tribute to those roots through out the show. Setting it off with a gospel infused intro, they raised hands to the most high and proceeded to swing the Brooklyn crowd into a frenzy.

I was the only one dancing at the start. This music courses through my veins, giving life to intense mental  and physical emotions. Emotions that eventually made there way to the rest of the audience. By the end second line style drums fused with blaring horns had every body on their feet. Dancing, screaming, whistle blowing, and playing tambourine. There is nothing like being so close to the stage that a trombone slide could hit you right in the nose. In this environment you feel the power the music vibrate every part of you. This is exactly what the Preservation Hall Jazz Band does, they play music that gets inside of you, forcing your feet to move, extorting your legs into a rhythmic fury.

The vibe was simply electric, Congo Square was inside of Metrotech. The history of African American music was pulsating through the atmosphere. Call and Response vocals led into extraordinary improvisations. Blue notes melted into break beats spawning bass grooves that penetrated your chest.

This is timeless music, and an extremely unique experience. Seeing a group of true professionals take the stage as a unit and bring the house down with their love for the music is not something we often anymore.  Each member of the band played from what was inside of them, giving NYC a piece of their soul, and we showed that love right back.  I would have loved for Aaliyah and Lola to have been there, but it was way to loud for them.

The hollers, yelps, claps, stomps, raised arms and active feet showed what Jazz music used to do…… make people dance. Jazz music used to be popular dance music.  We live in a time when Jazz music is known for being heady and artsy, not for dancing and partying. When it comes to the Preservation Hall Jazz Band nothing could be further from the truth. This is music for the hips, heart and the head all in one.

After the show I had to go and meet Ben Jaffe the artistic director Bassist and Tuba player for the band. I explained to him how his grooves inspired me as a musician and I strive to hold the bass down like he does. What I got in reply was a perfect answer. He said with his New Orleans drawl “Oh man, thank you. We need bass playas keep finding that pocket and you can’t go wrong. Duke Ellington, James Brown they laid it out, showed us what pocket was, all we have to do is find it. So I am  about to turn on some Ellington and the Godfather, crank up the amp and line some pockets. 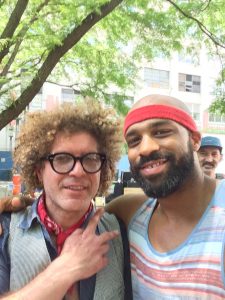 Me and Ben Jaffe