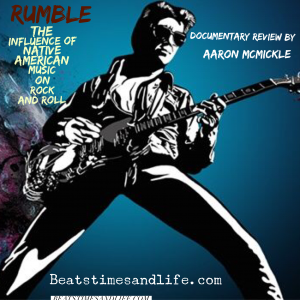 Vincent Vega and Mrs. Mia Wallace have just ordered a $5 Milkshake and Vanilla Coke at Jack Rabbits Slims. Vincent asks, “You think I can get a sip of that?” As Mia passes the shake over a pick rakes over guitar strings voicing a chord progression that changed the face of rock and roll with what we now call the “power chord”. (Pulp Fiction -Quentin Tarantino)

It was distorted and rough, menacing and powerful, all of which led to it being banned on radio. It was the only instrumental track to ever be banned for its violent sounds. The name of this track is “RUMBLE” by Link Wray. Link Wray and the Wraymen were game changers in Rock and Roll and they were also Shawnee American Indians.

The impact of Native music and musicians on American music is not something we discuss much. It is universally recognized that African music and culture have had the largest impact on the lexicon of American music. However because of early colonial ideas of manifest destiny, broken treaties and blatant need to destroy indigenous people and cultures we do not hear about Link Wray, or Buffy Sainte Marie. We don’t know that Mildred Bailey (born on the Coeur d’Alene reservation) was a major influence on Tony Bennett and help shaped jazz vocal technique. We don’t know that Jesse Ed Davis of Comanche and Kiowa ancestry was  considered one of the greatest guitarist of all time. He recorded with Eric Clapton, Taj Mahal, B.B. King, Neil Diamond and the Beatles. It has been said that Jesse’s playing inspired Greg Allman to take up slide guitar. http://jasobrecht.com/jesse-ed-davis-i-just-play-the-notes-that-sound-good/

We don’t know that Europeans first enslaved mostly Native Americans, however Natives knew the land so well they could escape and avoid capture. Once the slavers realized this they decided to just ship the Native men to the Caribbean, and keep the women. As more male slaves arrived from Africa, Native women and African men began having children together. This forced joining of cultures gave birth to an entire generation of Black Indians. Which led to the creation of the Mardi Gras Indian culture. Once the African syncopated drum patterns connected with the driving 4 on the floor beats of Native music as Ivan Neville would say “American Music was Born”

Amazon’s documentary “RUMBLE” dissects all these influences  and how easily we overlook the influence of an entire generation of musicians because of their ancestry. Musicians like Jimi Hendrix,  Redbone, Charley Patton and Oscar Pettiford are all of Native descent. Their ability intertwine indigenous music with Blues and Rock and Jazz helped lay a foundation for American music. We have studied, Black Jazz musicians, Folk Guitarists, Slave hollers, even Celtic and Klezmer melodies as apart of American music. As usual though America overlooks those who were already making this land great. We overlook the American Indian. Not just their music, but their entire culture. The American government has tried so hard to erase Natives from view, but “RUMBLE” is a good start to bringing truth to light.

From Link Wray’s Chords creating vibe in Pulp Fiction to the clothing and playing of Jimi Hendrix Native culture is a part of American culture and it needs to recognized and praised.

I highly recommend this documentary and I hope you enjoy the playlist associated with this post. The music varies widely and is just all around soulful and beautiful.