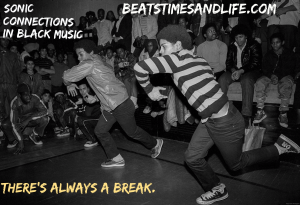 “THESE ARE THE BREAKS”

The foundation of Black music is THE BEAT. The beat and the rhythm hold all the other parts up. From Chain gangs to gospel choirs, to Mobb Deep a knocking beat is an essential element of any authentic piece of Black music. The Beat of Black music is often made up of short repetitive phrases or sections that are based on a steady, usually polyrhythmic percussion patterns. In Hip Hop we take a short piece of this pattern and loop it indefinitely.

This small portion we loop in Hip Hop is known as “The Break” A section of the music where either the record shifts into a new  direction for a short time, or a section where all other instruments fall out  leaving the percussion to shine.  This opening, or break in the music is another element handed down from our ancestors. Black music started out as these open drum patterns that we now call “Breaks”. Remember at first all we had were drums, voices and bodies.  Over the centuries Black music has become extremely lush and complex. However has always been and is still part of the foundation. When we “break open” the flow of a complex composition, stripping it down to its core, our roots are revealed.

Tricia Rose writes in Black Noize (pg67) “Rap Music techniques, particularly the use of sampling technology, involve the repetition and reconfiguration of rhythmic elements in ways that illustrate a heightened attention to rhythmic pattern and movement between such patterns via BREAKS and points of musical rupture.” These breaks and “ruptures” as Rose calls them are the legs of any hip hop beat, they hold the rest of the production up and help it to move from one place to the next.

In its true form Black music and dance are synonymous. When a djembe, tambourine, wood block and bone handled shaker make  a pattern together, this is a breakbeat. When dancers move in a circle to these breaks, trading spaces in the middle to get so, this is called a Ring Shout. What is the difference between the African tradition of the Ring Shout and a Break Dance cipher? Nothing. Leaving the drums agape has always compelled us to dance and or show off other musical gifts, including virtuosic instrumentation.

In Jazz the break is used for each member of the band to solo, or improvise within the structure of the song. Jazz follows in the African tradition of communal music making, but allows each artist to show off his or her own style and improvise as they feel.

“If there is any one aspect of performance that almost all the contemporary sources agree upon, it is the fact that slaves improvised their songs. “This improvisation goes forward every day….. The rhyme comes as it may, sometimes clumsily, sometimes no rhyme at all, sometimes most wonderfully fresh and perfect. (Southern 201)

The tradition of a solo break made it’s way from early Jazz into the Blues. The Blues expanded into Rock and Roll where the guitar solo became prevalent. Rock and Roll morphed into funk. Funk music took the musical element of vamping to make entire songs. (Christian McBride from- Mr. Dynamite HBO)

A vamp is a repeating musical figure that was normally used at the end of tune to fade out. Funk (most notably James Brown) took that small two to four measure section and had the band play it over and over and over. Looping the section while adding little improvisational hits and varying harmonic techniques. These ceaseless rhythms became the understructure of Hip Hop music. Hip Hop producers took the breaks and vamps of funk music, collaged them with fat kick drums and samples from around the globe to create the latest and most dynamic form of Black music….Hip Hop.

Below are some sonic examples of “The Break” and its growth within Black music.

Kiyakiya- Babtune Olatunji– At the start we hear the full timbre of the piece. At 19 seconds the vocal falls out and we just hear the drums. This is a break, it rocks for about 30 seconds then the vocal comes back in and the song continues. In Hip hop we rap over these breaks.

Mavis Staples- I’ll Fly Away- In this listening example we will hear how Hip Hop techniques create original “breaks” from openings within the song. The full ensemble is present when the recording starts. At 31 seconds I again  manipulate the record with a technique called back spinning. Allowing myself to repeat the same portions over and  over again, in any pattern I see fit. After I am done using the first part of the break in a Hip Hop format I allow the organ to return and play out a solo until the vocal returns at 1:40 seconds, ending the break. The way I manually repeat the phrase “Oh Yes” is a foundational characteristic Hip Hop built from the breaks and vamps of earlier forms of Black music.

This is Muddy Waters performing “I just wanna make love to you” After the hook we hear a break beginning led by a harmonica solo. About a minute into the piece I addd the Hip Hop element of looping a small portion to create a new rhythm. After the loop I allow the song to start back up and the break finishes with some stop time, then ends.

St. Thomas by Sonny Rollins is one of the most recognizable melodies in Jazz. The song happens to open with a break beat, and courtesy of master drummer Max Roach at 52 seconds  we get to hear an extended drum break. How many different rhythms can he play around the main groove? A seemingly infinite amount.

This is snippet from I Just Want to Celebrate by The Rare Earth. First we hear the chorus/hook, as the instruments fade out you here the drums begin to take the lead at (35 sec). The drummer plays a hypnotic rhythm that ignites the crowd, while the singer ad libs around the groove eventually bringing the full band back in.

I Just Want to Celebrate- The Rare Earth

Bar-kays-  Holy Ghost Break begins at 21 secs. I then bring the track back to the start so your hear the full composition, eventually returning to the break section at 1:10.

This break has been sampled over 700 times in Hip Hop, it is an essential part of the Hip Hop sound vernacular. Pay attention to the opening break from Synthetic Substitution then the drums from DWYCK. Dj Premier flips it into a certified classic.

DWYCK encompasses all the elements we have been discussing. DJ Premier provides the POPL with drums from Synthetic Substitution and the break from Hey Jude by Clarence Wheeler and the Enforcers. We can’t forget about the classic Preemo scratches that create another layer of sonic texture. GURU and Nice and Smooth show us how to use the Voice as and instrument, then at 1:19 we have a Break section.

Hip Hop is the ultimate manifestation of all Black Music in America. We improvise with “Freestlye” sessions, Dance in circles like a ring shout, layer our percussion with sample upon sample. We employ call and response, write lyrics with common themes all while using  the voice as an instrument. We use the foundations of prior generations to create something fresh. Samuel Floyd wrote

Louis Armstrong learned from King Oliver, Bessie Smith learned from Ma Rainey, James Brown learned from Little Richard. Our ancestors learned from their parents and griots the ancient musical traditions. What each generation did, was take a portion of what they learned and add their flavor to it, allowing something truly beautiful to be born…. Hip Hop.