Upgrade Your Grey Matter To Save Humanity? 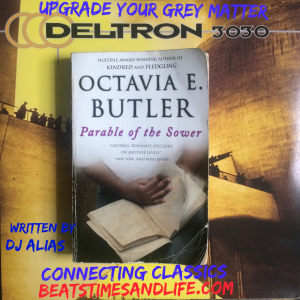 Three times last week in small talk conversations with complete strangers the topic somehow got to “Are we going to make it, like as humans” or some sort of talk of the apocalypse. This is funny because I just finished The Parable of the Sower by Octavia Butler. This is the story of a girl named Lauren who is living in a L.A. after the collapse of all government systems. The Police and Fire department are no longer a public service. Water is scarce and extremely expensive.There is a new drug that makes people set fires, being armed is an absolute necessity, and you just might find a corpse as you go about your day.

Comparatively, after I finished the book I began listening to an album by Del. The album is entitled Deltron 3030. Deltron and producers Dan the Automator and Kid Koala take us into a post apocalyptic world that is “morbid and horrid” A spaced out Hip Hop journey, complete with intergalactic rap battles, deadly computer viruses, and cyber warlords who terrorize humanity with weaponized computers.

Butler and Del both paint a picture that is unfortunately all to real. They create a landscape that is part  Boyz n the Hood, part Armageddon and part Mobb Deep Hell on Earth with biblical foundations.

This familiar but chaotic landscape reminds me a lot of 2019. In both of these pieces all of the same issues we are dealing with as humans on Earth have now reached a boiling point. Sea levels are rising, entire pieces of land mass are falling into the sea. Climate Change, random acts of violence, terrorism and government corruption are all vividly brought to life by Butler and Deltron. In Both Deltron 3030 and Parable income inequality, and corporate greed have destroyed humanity. You must travel in groups, and trust no one. I don’t think 2019 is that bad yet, but we are not far from the time Butler envisions.

Parable of the Sower takes place from 2024 -2027 only 5 years from now.  There are glimpses of a world that we recognize, especially in Parable. For example there is an election happening in 2024. The front runner is a racist candidate who will set humanity back 100 years. If elected, sound familiar?

In Deltron’s world corporate greed has created a permanent underclass, and Hip Hop has turned into a propaganda tool. This r really struck accord with me because………it’s reality.  The vision of Automator and Del to create a concept album that predicted the times is nothing short of incredible. The album was released in 2000 long before we had 45, long before computers tracked your every movement in the hopes to sell you those boots you looked up. Long before AI, and before we were truly focused on Global warming. Yet all these topics are touched on in 3030 with Hip Hop sensibilities.

All this  talk of Apocalypse and Global Warming, Terrorism, and gun violence makes it difficult to stay positive. I usually end the global warming convo with something like. It’s to far gone anyway, “bags and bulbs” are nice but the damage is done. People our age will make it, maybe our kids kids will be ok. After that there will start being climate refugees. Once people start leaving their home land looking for water and bearable weather, humanity will shift. However both Del and Butler give us hope.

The main character Lauren does a lot tot “keep hope alive” Lauren has “hyper empathy” syndrome. This means that she can physically feel the emotions of others, good or bad. She can feel the joy along with her friends, but also actually feel their pain as they go through difficult times.  It is this empathy that drives her to create her own spiritual following which she calls “Earthseed”. Earthseed is based on the principle that this earth we are on now is only the “seed” of what humanity can be. We can grow to be much greater, but not on this earth. Earthseed followers will eventually settle on another planet where love and empathy win out.

Deltron also gives us a glimmer of a better day. On a track called “Updrade ( A Baymar college course).  Del tells us to “Upgrade your grey matter, cause one day it may matter” This is a play on the “grey matter” inside of our brains. Grey Matter are cells that make up the cortex of our brain. They have a lot to do with thinking, and our thought processes. Del is saying that knowledge and having the most up to date grey matter is the only way to “Dwarf the Corporate” and be in control of your own life in 3030. We live in a time of Anti-Intellectualism, and as a result people are reading less, and in turn not learning anything. You heard it from Del…. Upgrade your grey matter, cause one day it may matter”

Empathy and upgrading our processors (brains) to help save humanity? I think Butler and Deltron both have it right. The combination of  putting yourself in someone else’s shoes (empathy) and then taking the time to actually learn about the person in those shoes, where they come from, what their culture is really like.  (upgrading your grey matter). This two small actions can make a huge difference.

Busta Rhymes said it in 1995 (The Coming) and I am saying it now “There’s only five years left” Busta was talking about the y2k but Parable takes place in 2024, and we are way past 1984. We must find a way to unite humanity on a global scale. Not to save America, but to save the whole world.  America will not matter when the glaciers fully melt, America won’t matter if it continues to lose sight of its founding principles due to ignorance and fear. So please let’s use these two great pieces of art to Upgrade our grey matter and help the WHOOLE WOOORLD! (Killer MIke)

I have to say, I love connections like this that run in between styles and mediums. So this was really fun to write. Deltron got bumped front to back at least six times during this process.