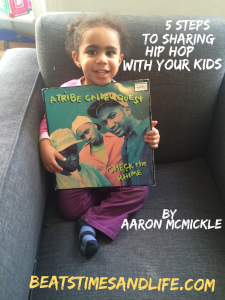 The modern ghetto Jigga raps about is the place where Hip Hop’s stories of  gang life, violence, sex, and drug use came from. A ghetto created by policy makers who did not care about poor people of color.

It is important to know this history, so that we can understand the foundations of this culture. If Hip Hop is important to you, and helped to shape you, at some point you will want to share it with your children. As they get older they will be exposed to it anyway. It is up to us as parents to help guide their listening. Unearthing the social context behind the music, and helping them see the lineage of Hip Hop as part the African diaspora. While also giving them the right information to just listen and enjoy the vibes as entertainment.

Hip Hop started out as party music. DJ’s spun break beats (open drum parts of tracks with little instrumentation around them) to get B-Boys and B-Girls to lose themselves in the music and to dance more furiously. From park jams, to the Sugar Hill Gang on to LL.Cool J, The Beastie Boys and RUN DMC, a good time was the main objective.

We then move on to the likes of Eric B. and Rakim, Public Enemy, EPMD and KRS ONE. Party tracks were still filtered in there, however having a message, original style and knocking beats became the objective.

As time moves into the 90’s with N.W.A, Biggie and Pac the street stories became more vivid and more vulgar. Lyrics became highly evolved poems, that painted pictures for the listener. Hip Hop always had a bad rap but, at this point the American government was cracking down on it, trying to censor it and use it as a scapegoat for society’s ills.

Eventually major corporations saw the economic power of hip Hop and began to mass market it. This transition produced the cookie cutter images of gangsters, pimps and hoes we see in hip hop today. These images that reflect almost no diversity within the spectrum of the artists. If you have a message in your music, you will be stuck in the periphery of Hip Hop culture. This should not be the case. We as parents who love Hip Hop should not hide the music we love from our kids. We also should choose wisely how we share this music, and create a foundation for what we think is acceptable.

How do we do this? Well here are 5 steps to sharing hip Hop culture with your kids.

Choose the right artists-  You don’t have to jump in with the rawness and try to explain it. Talk about the historical portion a bit and play some fun old school songs like.

Catch The Beat by T-Ski Valley- It samples Heartbeat by Taana Gardner. Start with that, discuss how at first Emcees were rapping over disco records.

King Tim III (personality jock) – By Fatback Band A straight funk jam that shows how early emcees rocked it. I mean it’s a stone groove with old school rapping over it, it’s gonna make you dance, always a good thing with kids.

The Message by GrandMaster Flash and the Furious Five. – This song has an intriguing beat that can capture a young listener from the start. We also hear the first set of lyrics that really dig into social issues experienced by people of color in these ghettos constructed to keep them voiceless. This is a great one to read along with. Lines like

“Don’t push me cause I’m close to the edge, I’m trying not to lose my head”

These lyrics are a great starting point for discussing where hip hop came from and why this expression was so important to these incredibly creative individuals.

Hip Hop Hooray by Naughty by Nature- Kids love songs that have dance moves . Once you start the Hip Hop Hooray Hoooooooo, Haaaaaaaay hands in the air dancing around, its going to fun and memorable.

Approach the topic of misogyny and sexism and homophobia with care

Hip Hop culture has always been a boys club, a few women have made it, but not many. As Pilar and I raise up two black girls in this sexist society it is important to let Aaliyah and Lola know a few things. They must know that they are powerful, brilliant, creative, independent and capable of being in charge, not just being a prop for someone else. Hip Hop can be detrimental to a young women of color. Mainstream images of females in Hip Hop are less than flattering. Mostly “sex objects”, or a “boss type bitch” no in between or artistic variety. We must present hip hop to our kids that is made by amazing, diverse, strong women.  As well as records that women and give inspiration for growth. Here are some selections.

That Thing- Lauryn Hill – Filled with soulful harmonies and L-boogie at her finest, this is a great record. A nice segway into how relationships work, the good the bad, and what to be careful of. (Really the entire Miseducation of Lauryn Hill album, just listen to it)

Latifah’s Had it up 2 here by Queen Latifah- This is the Queen at her best. Dana Owens letting  other emcees know Who is in charge. If you say negative things about me, I will let you know.  I’m better than you and never step to the mic when I’m around.  If you are trying to build strong leaders, play this record. The double entendre of “Some of these commercial entertainers are commercially a pain to my rhyme and my behind TRYING TO DISS DANA. I love it because her name is Dana, but she enunciates the line so it could be saying DANA or Disdain her.

U.N.I.T.Y. by Queen Latifah- All we have to say about this song is “Who you callin a bitch?”

Keep ya Head Up- 2 Pac– This record takes on domestic violence, reproductive rights, single motherhood and black love all in just the first verse.

Flawless by Beyonce- She is out shining Jay-Z! She does not need a man, or marriage. She is living her artistic vision, she’s in charge and everyone knows it. The poem by Chimamanda Ngozi Adichie tackles the question: why we ask women to aspire to marriage, and see other women as competition. Great talking points for raising informed women who are aware of their power.

Total Wreck by Bahamadia- Lyrics of fury is all you can say about Bahamadia. She is not very well known, but rips the mic majorly.

Make it Fun and show the artistic diversity.

I know I can very easily take Hip Hop too seriously. My life is dedicated to all of its beautiful intricacies. However to bring kids in, you have to keep it fun. Here are some  fun songs that you can dance to, and just have a good time.

Me, Myself and I- De La Soul- An Uptempo track that samples Parliament. The track opens up with a Hip Hop take on Snow White, then the trio let us know its ok to just be yourself.  De La is a perfect way to show how Hip Hop can have diverse sounds, imagery and subject matter. The track  just feels good, brings nostalgia for parents and is fun to party to. The whole album (Three Feet High and Rising) is kid friendly and a Hip Hop classic.

Tennessee and People Everyday (remix) by Arrested Development- Tennessee, great beat with lots a quotable lyrics that address dealing with the stresses of life. “I challenge you to a game of horseshoes…..A game of HORESHOOOES!”

People Everyday- The Call and Response at the start will hook any one of any age. Play it, dance. Then maybe play Sly Stone Everyday People to bring it full circle. Arrested Development in general is a positive group with true hip hop aesthetic.

Hey Ya by Outkast- All generations love this song, it just makes everyone happy. Count in with Andre 3000 1,2,3 uh and Get up, get into, get involved.

I Can by Nas- Nas gives us a history lesson while simultaneously uplifting the youth. Hard work and perseverance are the main themes within this record. I really like how he says “Nothing is easy, it takes much practice” A lesson that is hard to teach in an age of instant gratification.

Let me clear my throat by DJ Kool- A classic party record that also has a call and response dance section. Try it out, “when I say freeze you just freeze one time, when I say freeze yall stop on a dime, FREEEEZE!

Alphabet Aerobics by Blackalicious. Kids learning the alphabet and new words?  Two measures at a time Gift of Gab raps words that all begin with A then b, then c all the way to Z.   This takes some close listening but there is a lot to learn about connecting words, and learning words that begin with each letter of the alphabet.

Read along with the lyrics as you listen

An excellent way to see how great an emcee is to try to repeat the lyrics in time with the same cadence and rhythm the rapper used. It’s a fun activity that involves reading and musical timing.  Whenever I read lyrics of songs I think I know by heart, I realize I don’t really know it exactly. It’s really challenging so the bloopers are fun. You can gain a real appreciation for the rappers delivery and the message of the song as whole by doing this activity.

Who to read along with? Outkast, Black Thought (Emcee from The Roots), Busta Rhymes, Jean Grae. all of these artists present complex rhyme schemes in extremely musical and creative ways. Try to rap along with them, its tough.

These aspects are rarely discussed in mainstream Hip Hop. If you can show you tube videos of DJ’s cutting breaks, while dancers spin on their heads, kids will be into it. A freestyle battle where emcees are improvising lyrics based on their surroundings, with someone beatboxing is a great way to draw them in. Unfortunately the 5 pointz is gone here in NYC but there are plenty of pieces and murals around to show our children. If you are not in a city with graffiti,  hit up the internet. You can find great graffiti art to share. Maybe even work on some bubble lettering together.  If you can connect those murals to Hip Hop, they will see that this culture was created to give a voice to young people that society threw away.

I Hope this piece helped to give you some ideas on how to share this beautiful art form with your children. Enjoy the music, dance, have fun, talk, share ideas on life and society. Hip Hop can help us learn more about each other. Helping to  shape critical thinkers, listeners, and build an informed citizenry.